A river near the inter-Korean border has turned red after being polluted with blood from pig carcasses.

South Korean authorities had culled 47,000 pigs in an attempt to halt the spread of African swine fever (ASF).

Heavy rains caused blood to flow from a border burial site into a tributary of the Imjin River.

African swine fever is highly contagious and incurable, with a near zero survival rate for infected pigs, but it is not dangerous to humans.

Local authorities dismissed concerns that the blood could cause the spread of African swine fever to other at-risk animals, saying the pigs had already been disinfected before being slaughtered.

An outbreak across Asia

The pig-culling operation was carried out over the weekend. The carcasses were said to have been left inside multiple trucks at a burial side near the inter-Korean border.

A delay in the production of plastic containers used for burial disposal meant that burials could not be carried out immediately. 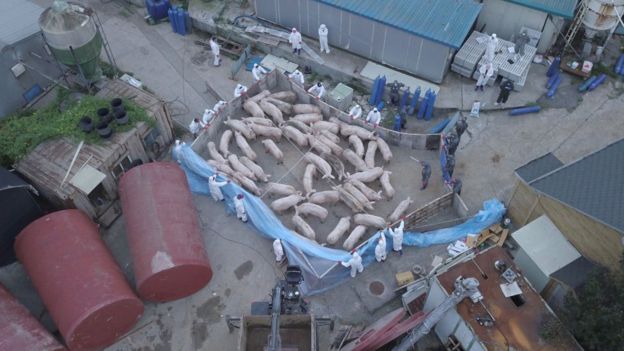 ASF was only discovered in South Korea recently, and there was speculation it arrived via pigs crossing the heavily guarded demilitarised zone (DMZ) that separates the North and South.

The first case of ASF was recoded in North Korea in May, and the South made great efforts to keep it out, including border fences.

The South Korean military was authorised to kill any wild boars seen crossing the DMZ.

Despite the precautions, South Korea reported its first case on 17 September - with the total now at 13. There are around 6,700 pig farms in South Korea.

Much of Asia has been affected by the outbreak, including China, Vietnam and the Philippines. Some 1.2 million pigs have been culled in China alone.

ZIMBABWE: PRIDE OF LIONS KILLS 5 POACHERS AND INJURES 3 OTHERS

Police Officer Stays At Shelter Overnight With Stray He Rescued